The purpose of the day is to raise awareness around the globe that suicide can be prevented. Suicide occurs all over the world and can take place at almost any age. Globally, suicide rates are highest in people aged 70 years and over. In some countries, however, the highest rates are found among the young. Did you know that young males 15-29 are at highest risk of suicide in Trinidad and Tobago?

Reducing access to means of suicide is one way to reduce deaths. Other effective measures include responsible reporting of suicide in the media, such as avoiding language that sensationalizes suicide and avoiding explicit description of methods used, and early identification and management of mental and substance use disorders in communities and by health workers in particular.

Preventing suicide is often possible and you are a key player in its prevention! You can make a difference – as a member of society, as a child, as a parent, as a friend, as a colleague or as a neighbour. There are many things that you can do daily, and also on World Suicide Prevention Day (WSPD), to prevent suicidal behaviour. You can raise awareness about the issue, educate yourself and others about the causes of suicide and warning signs for suicide, show compassion and care for those who are in distress in your community, question the stigma associated with suicide, suicidal behaviour and mental health problems and share your own experiences.

Suicide prevention remains a universal challenge. Every year, suicide is among the top 20 leading causes of death globally for people of all ages. It is responsible for over 800,000 deaths, which equates to one suicide every 40 seconds.

Every life lost represents someone’s partner, child, parent, friend or colleague. For each suicide approximately 135 people suffer intense grief or are otherwise affected. This amounts to 108 million people per year who are profoundly impacted by suicidal behaviour. Suicidal behaviour includes suicide, and also encompases suicidal ideation and suicide attempts. For every suicide, 25 people make a suicide attempt and many more have serious thoughts of suicide.

Warning signs that someone may be seriously thinking about suicide

Who is at risk of suicide?

What you can do

-Find an appropriate time and a quiet place to talk about suicide with the person you are worried about. Let them -know that you are there to listen.

-Encourage the person to seek help from a professional, such as a doctor, mental health professional, counsellor or social worker. Offer to accompany them to an appointment.

-If you think the person is in immediate danger, do not leave him or her alone. Seek professional help from the emergency services, a crisis line, or a health-care professional, or turn to family members.

-If the person you are worried about lives with you, ensure that he or she does not have access to means of self-harm (for example pesticides, firearms or medication) in the home.

-Stay in touch to check how the person is doing. 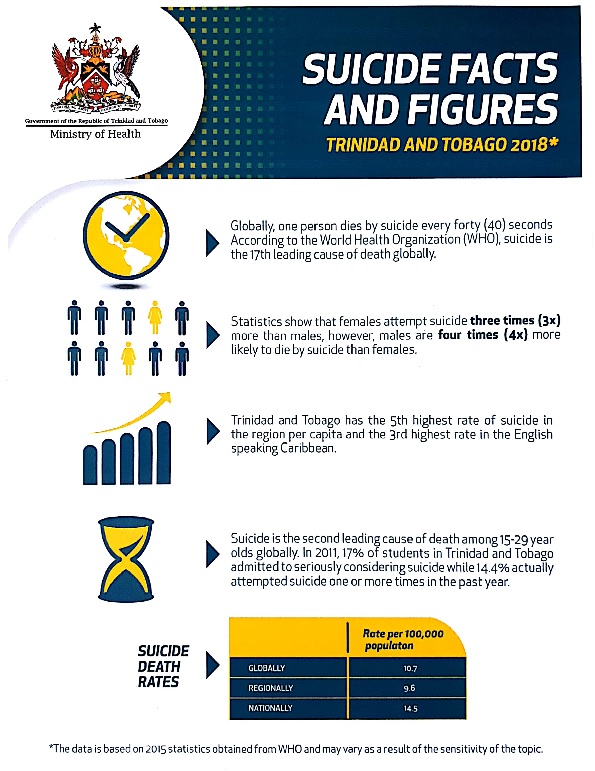 For help and more information: