The prostate is a small, walnut shaped gland in men, which helps in producing seminal fluid, which nourishes and transports sperm. It is found right below the bladder, along the seminal vesicle, which is the duct that transports sperm from the testes to the urethra, to be passed out via the penis. Tumours and carcinogenic growths in or on this organ are known as prostate cancer. 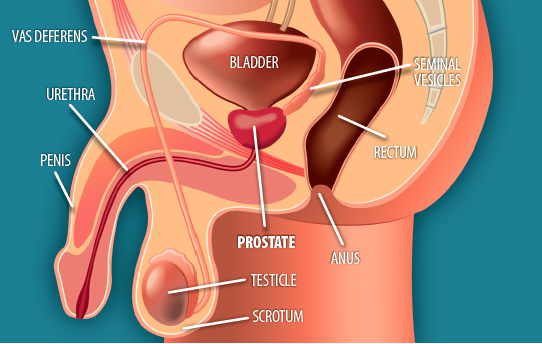 Prostate cancer is the most common cancer of adult males in Trinidad and Tobago, accounting for 19.5% of all incident cases at the National Radiology Centre (NRC) in 2018 (Annual Cancer Registry Report, 2018, NWRHA). Globally, it is the second leading cause of death from cancers in men (American Cancer Society, 20181), and the American Cancer Society estimates that 1 in 9 men will be diagnosed with this disease in his lifetime, and 1 in 41 men will die from the disease. Prostate cancer affects men of all races and ages, although this risk is not equal for all men (Mayo Clinic2). Major risk factors for this disease are:

Early stages of prostate cancer are usually symptomless, as the cancer is usually slow growing, and many patients will not require treatments for this disease. In more advanced stages, the signs and symptoms of this disease include:

These symptoms are not limited to prostate cancer, and may indicate hyperplasia, or enlargement, of the prostate3. However, they still indicate the need for a medical check if experienced, as the enlargement of the prostate is a condition that should also be treated, and so if you or a family member experiences these, see a doctor as soon as possible. The doctor will do one, or more of the following tests, to determine the exact nature of the disease, as well as the severity:

When the stage and extent of the disease is determined, the doctor will decide on the course of treatment for the patient. Major treatments for prostate cancer are:

Often, a single approach is used, although the physician may combine multiple treatment plans based on the individual disease.

Early detection of the disease is important, as early stages of the disease are much easier to treat and cure. International guidelines recommend that men above the age of 55 get screened annually with the PSA or DRE methods, or as directed by their doctor2. New recommendations for screening in Trinidad and Tobago4 indicate that, as a high risk population, screening should begin as young as age 40, especially in higher risk men. Screening is available at NWRHA health centres, hospitals and outreach events. Take your prostate health into your own hands today, and live a healthy, happy, long life with your loved ones.