Breast cancer is the most commonly diagnosed cancer in Trinidad and Tobago, accounting for 21.6% of all new cases at the National Radiotherapy Centre in St James in 2018 (NWRHA Cancer Registry Annual Report). Amongst women specifically, it accounted for 43.7% of all new cases of cancers in women in 2018 (NWRHA Cancer Registry Annual Report). Globally, breast cancer is also the most common cancer amongst women, affecting 2.1 million women annually, and leading to 15% of all deaths from cancer (WHO, 2018). It is more common amongst women in developed nations, but affects women from all socio-economic and ethnic backgrounds (Figure 1). 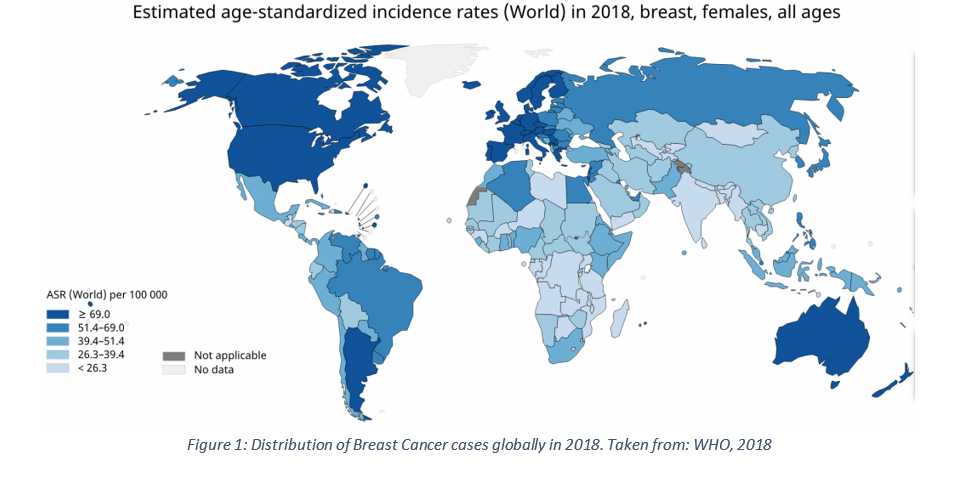 Breast cancer arises in the breast tissue, as well as surrounding and supporting tissues, such as the lymph nodes (Figure 2). As with all cancers, it occurs when the cells in the tissues begin to divide quickly and uncontrollably, forming a mass, called a tumour. It frequently begins in the milk ducts of the breast, in which case it is known as invasive ductal carcinoma, but can begin in other sites as well. The cells of the tumour can also move out of the breast tissue, into other sites of the body, a phenomenon known as metastasis. Common sites of metastasis are the bones, lungs, brains and the liver, due to the proximity of these organs to the breasts, or due to the distribution of blood and lymph vessels. Breast cancer can be confined to one of the breasts (unilateral), or can be in both breasts (bilateral), and tumours are more common in the left breast than in the right. 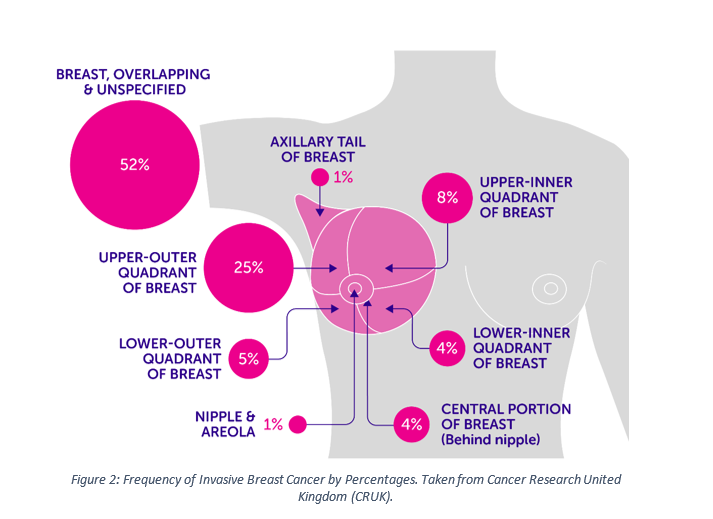 The tumour in the breast, depending on the size and location, can have little or no obvious symptoms, and so may not be detected until a late stage, where it is more advanced and more difficult to treat. Some symptoms that may indicate breast cancer are:

If you experience any of these symptoms, you should see a doctor.